REACH, formerly the Center Against Sexual Assault of Southwest Riverside County specializes in the prevention, intervention, and treatment of sexual & domestic violence, childhood trauma and abuse, and human trafficking. All services are free and confidential for survivors of all ages. Services are survivor-centered, trauma-informed, and empowerment-based.

We intentionally foster deep resilience in our community. We support children, adolescents, and adults in adapting to and overcoming trauma and adversity through prevention and healing services, to reach their potential.

REACH, formerly the Center Against Sexual Assault of Southwest Riverside County (C.A.S.A.) began in 1982 in response to one teacher’s effort to help a student who was a victim of a violent rape. In the beginning it was strictly a volunteer effort, providing a crisis line and accompaniment services to survivors of sexual assault. This is all still in place today. Volunteers are still crucial to our mission and currently, REACH has approximately 20 volunteers who donate their time and their energy to the agency.

REACH offers a 24 hour crisis line; provides accompaniment and advocacy services to survivors and their significant others; supplies information and referrals; and provides support groups and individual counseling with professional therapist free of charge. An active prevention and community education program reaches out to our community to educate our valley residents.

In 2019 the Center Against Sexual Assault made the decision to rebrand our non-profit organization to REACH, reflecting the expansion of our mission to a trauma-focused center that also serves victims of domestic violence, child abuse, and human trafficking. 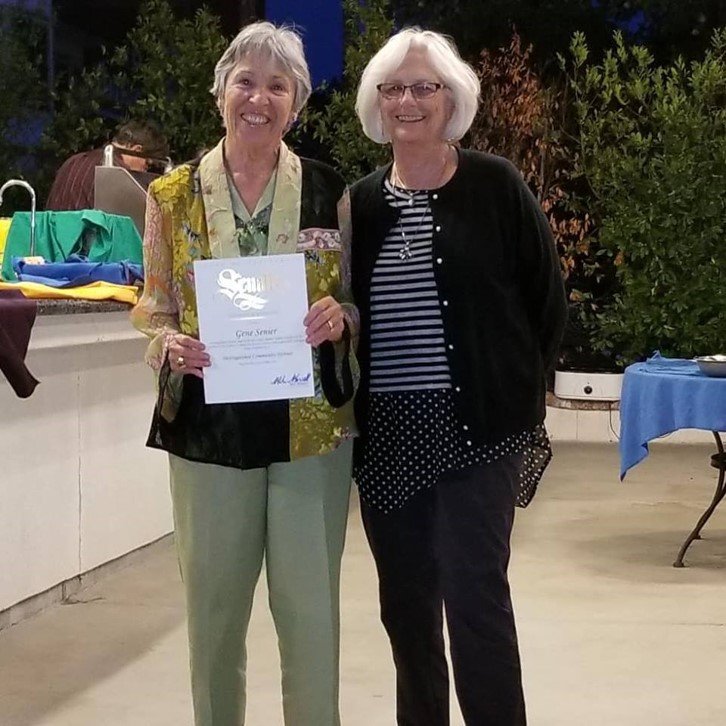 A letter from gene (prenshaw) senier

In 1982, a 16-year-old student went to a high school graduation party with a friend. When they left, there was not enough room in the car her friend was in, and, because she was a relatively new person to the school and area, she got into another car her friend designated as safe. It was not.

Three males took her to a deserted spot in the river bed, sexually assaulted her, and drove her home. The next morning, she did not go to school. Her friends knew something was wrong and told two teachers. I was one of them. I went to the house and found her covered up in bed, still in her clothes. She was crying and told me what had happened. She did not want to do anything about it.

We had presentations every year in our classroom from the Riverside Area Rape Crisis Center and I asked her if she would at least talk anonymously to someone from the Center. She said yes. As she listened, I heard her move from victim to survivor.

By the time the call ended, not only did she want to go to Riverside for the rape exam, she wanted to report to the authorities. She was angry! They instructed her to not change her clothes, take the shoes she wore, and not shower. I then took her to a Riverside hospital where an Advocate was waiting for her. Thus began not only this young woman’s odyssey ending with the convictions of her perpetrators but also the beginning of my own journey in realizing that we needed local services for our own valley communities.

Later that year, several people came on board including the other teacher, Mary Coss, and we became a satellite group of the Riverside Rape Crisis Center. We were all trained and began volunteering to answer phones, 24/7, and be there at all stages for those who had been sexually assaulted.

In 1983 the Riverside agency decided that we had grown enough and suggested we start our own agency. It was at this time that our “angel” arrived; Reverend Cindy Manion came to town. She was imminently qualified to help us organize into a non-profit organization, with the legal assistance of Marianne Kelly of Cox/Donnelly. By January 1984, we were in full operation. We had a 40-hour training of about 20 volunteers. We also trained local police and hospital staff. We offered a twenty-four-hour hotline, Advocates at the local hospital, court support, community presentations and support groups for survivors and their families, and physical space at the Episcopal Church on Carmelita, in Hemet, thanks to the efforts of Larry Steele. We needed funding of course. We gave many talks to local philanthropic groups and wrote grants. We received donations and grants from United Way and eventually from the Office of Criminal Justice and Planning (OCJP). We were able to use two church rooms and hire a director. We had brochures and cards with the logo of a hand. It was the left hand of our artist-in-residence, Mary Coss, who had to look at her hand and use her right hand to draw it! I think the logo changed, but that was the original one.

Thanks for asking for all of this before it gets lost through the ages. CASA is something we continue to be proud of and are so pleased that the organization is still going strong. Continued success.

A message from REACH Board President, Gregg Hillis

Our work would not be possible without our valued community partners